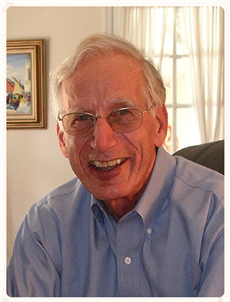 Dr. J. Michael Miller was born in Ohio and grew up in northern Illinois. He attended DePauw University for one year following high school and then accepted an appointment to the United States Naval Academy in 1952.
He graduated from the Naval Academy with distinction in 1956, and married his wife, Dolores, a Registered Nurse, in December that year. While in the Navy, Mike served on a destroyer, a diesel submarine and, following nuclear power school, on a Polaris missile nuclear submarine.

In 1964 Mike followed a call to enter the ministry and enrolled at Boston University School of Theology. During his student years, Mike served two Methodist churches and one Congregational church. Upon completion of seminary, he was awarded scholarships to continue studies in Boston University Post Graduate School, earning a PhD in Biblical Studies, Old Testament in 1972.

From 1971 through 1978, Mike served as pastor of Woodridge United Methodist Church in Woodridge, Illinois. In 1978, he was invited to teach Old Testament Studies in the Graduate School of Theology at Oral Roberts University in Tulsa, Oklahoma, where he served as Acting Dean during his last year there.

During Mike's nine years at Roswell UMC, he worked with the many adult classes helping to develop curriculum and special studies in addition to teaching many of those classes.  He also taught and had a team of facilitators teaching the Disciple Bible courses.

An early participant in The Emmaus Community in Oklahoma, Mike provided pastoral leadership to both the Northern Illinois and North Georgia Emmaus Communities.

"Retiring" in 1998, Mike continued teaching, including a semester in Kazakhstan for The Mission Society in 2003, and at Meserete Christos College in Debre Zeit, Ethiopia by invitation of The Mennonite Church in 2009.

During these years he wrote sermons, prayers, poetry, curriculum for Cokesbury as well as publishing two short books, one about prayer and one a Bible study book. Several other writings are deeper studies and may be available on this site from time to time.

Dr. Miller passed away peacefully at home on July 7, 2015 seven months after a stroke. His daughters and friends continue to make this website available to carry forward his teaching and ministry.